Day 0: How I Got My (Unexpected) Soapy Internship 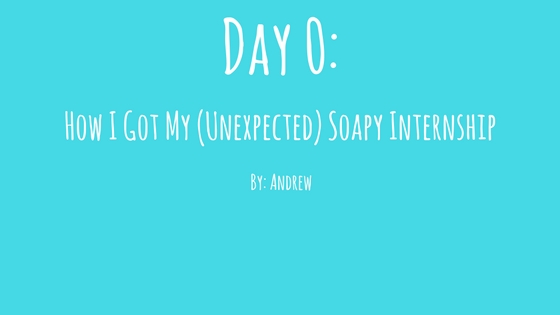 (This post is the first in a series of stories from Soapy Soap Co. staff- we hope you enjoy this journey behind the scenes! -Anthony)

As I was finishing up my spring semester this past April, I, like most college students, was faced with a challenge harder than any term paper I will ever write: Finding a summer job (that I actually love.) Granted, I had slaved in the hot kitchens of fast-food pizza joints every summer before and did not entirely hate the job, but I was determined to find something that I was actually passionate about. So I set out on my quest with high hopes.

You’re an English major, and you love to write. There has to be a place in Bloomington looking for a writer, I told myself as I searched through page upon page of job listings. Yet alas, I found nothing, and dreadingly began to think that I was doomed to deliver pizzas for eternity (well, until I graduated at least.)

But then, as I was scrolling through the spammy emails IUB sends me day in and day out, one of these emails caught my eye: IU SUMMER JOB FAIR. My heart skipped a beat, and I opened the email as fast as I could. I quickly found the list of employers attending the fair, and I rapidly began to scroll through them — until I found one that really stuck out to me.

As a 2 year strong Lush junkie, my soul just about departed my body upon the thought of working for a soap company.

I quickly did a google search, found their website, and saw that they were hiring a new production employee. So I immediately uploaded my resume, threw together a cover letter — one I should have spent more time on — and emailed both documents over to them. To my delight, I received an email the very next day asking me to come in for an interview, which I of course accepted and scheduled for the very next week.

Flash forward to a week later, and I’m sitting in my car in front of the production warehouse. I give the number listed on their website a call to let them know I’m outside, and then two guys (Mohammed M. and Anthony) bring me in and sit me down in the conference room. I was extremely nervous, but Mohammed M. and Anthony did a phenomenal job of trying to make the interview as laid back and conversational as possible. They asked me about my interests and hobbies, my prior work experience, and all of the usual interview questions. Everything seemed to be going great — until they asked me about my availability.

“Sounds great, how about during the fall?”

The look on their faces told me that it was a no go.

“Oh… Well, for the production position, we’re actually looking for someone who could work full time year round…” Anthony sympathetically explained.

Welp. That’s it. Back to Pizza.

“But,” added Mohammed, “We do have an internship program that we think would be perfect for you — since you’re an English major, you could maybe do some writing for us. If you’re interested, we can begin interviewing you for that position instead.”

Once again, my soul just about departed my body.

Mohammed and Anthony instantly began to ask me about my writing: My strengths, my weaknesses, my experiences, how I think my writing can benefit them, what I would like to write for them, and so on. Once again, things seemed to be going really well. And then Mohammed pulled out my cover letter.

“Okay, well let’s take a close look at your writing then." Mohammed began to read over my cover letter, and, when I say read, I mean close read. He began scrutinizing every sentence, every word, every letter; He questioned my syntax and choice of diction, my purpose behind writing “X” sentence and my purpose behind putting “X” phrase before “Y” phrase.

“These two clauses right here don’t seem to really connect that well. Why did you write this sentence like this?”

Once again, for the third time, my soul just about departed my body.

You’re an English major, Andrew. You close read poems and essays written by people all the time. Just do it to your own writing for once.

And so I did. I thought about it, and explained why I made the choices I made. For the choice’s I shouldn’t have made, I explained that I hadn’t thought about that given sentence as closely as we are now, and that I would now write something else instead.

Still, I was afraid I was butchering it. However, what Mohammed said next completely surprised me.

“Well, we really enjoyed this interview, and we’d love to offer you the position! We can call it “Publications Intern” or something. We’ll put it up on our IndianaIntern page — just apply to it there once it’s approved by the administrators of the website, and we’ll accept it.”

They then grabbed me a Peppermint Lip Balm (which is amazing, by the way) and walked me — still disoriented from the preceding events — to the door.

I went home, smelling amazing from just being there, and told my roommates about the interview. While I was uncertain about what exactly it would entail, I was ultimately excited about the new position — and the possibility of scoring some free soap.


Posted on Sep 25 2016 by Andrew . Posted in Soapy Stories. Tagged behind the scenes.