So, here's a little-known fact about Mohammed M. Although he may not have been squarely in her demographic, he watched “The Oprah Winfrey Show” every chance he got when he was a kid. He even memorized the words to the show's theme song (which he will still sing, if you ask him nicely.) “I even tried to make it the ringtone for my phone,” he admits.


It was a particularly important part of his summertime routine. With school not in session, he would roll out of bed, grab a bowl of cereal, and wake up with Oprah. And, since he lived in a suburb of Chicago and Oprah was based in Chicago, he also kept an eye out for her whenever he left his house. (“I thought maybe I would see her somewhere one day!” he laughs.) 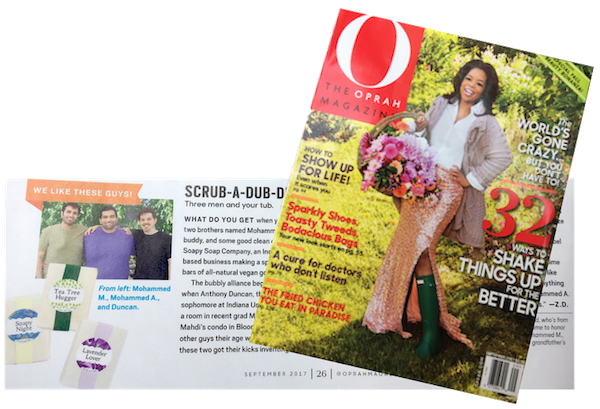 He even signed up to get tickets to her show, but that never quite panned out for him. Just what was it about Oprah anyway? “She just seemed really nice. She talked about stuff like, If everyone mails out one dollar to this person in need or to that charity, I'll match it!”

Fast forward a decade or two and Mohammed M. is pinching himself, because Soapy Soap Company and DesignMySoap.com are featured in the September 2017 print issue of O Magazine. You can also read “How Three Guys Started a Vegan Soap Company” in O Magazine online.

What could be better than that? Mohammed M. doesn't miss a beat: “Knowing Oprah read the article! That would be amazing!”


Posted on Aug 18 2017 by Susan . Posted in News and Updates. Tagged behind the scenes, press, oprah.